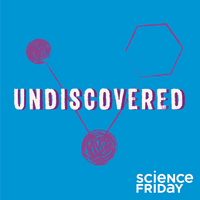 Undiscovered is produced for your ears! Whenever possible, we recommend listening to—not reading—our episodes. Important things like emotion and emphasis are often lost in transcripts. Also, if you are quoting from an Undiscovered episode, please check your text against the original audio as some errors may have occurred during transcription.

ANNIE MINOFF: Hey! Annie and Elah here. We are of course between seasons of Undiscovered right now. We are popping back for a hot second because recently we got an intriguing question from a listener on twitter.

ELAH FEDER: MmHmm. So this past season we had an episode about what saved the whales.

ELAH FEDER: So how we went from thinking of whales as these scary beasts of the sea to completely going bananas for them. And it turns out a key turning point was figuring out that whales sing.

ELAH FEDER: So that episode got one of our listeners his name is Bob Collom thinking, ok, if whales song saved the whales what saved the cats? Because we didn’t always love cats either.

ANNIE MINOFF: And cats do not have a haunting or mystical song I would hazard.

ELAH FEDER: Definitely a glimpse of the divine in that. So the question is where did this love of cats come from? We dug into it, we talked to a cat history buff.

ELAH FEDER: Fascinating conversation. Turns out not a lot of science to it but-

ELAH FEDER: -at Undiscovered we love a good history saga. And we have that answer. So we called up Bob.

BOB COLLOM: Yup. This is Bob…

ANNIE MINOFF: And Bob side note has a completely fascinating job.

ANNIE MINOFF: So wait so do you work for NASA is that right?

BOB COLLOM: I do. I'm at NASA headquarters in the Mars exploration program. I work on the human landing site study. Basically we're trying to pick what the best and most interesting place to put humans on Mars is.

ANNIE MINOFF: What are the contenders?

BOB COLLOM: Well right now it’s the whole planet. I am personally interested in the Aeolis Mons area. The closest site that was submitted would be huge ancient volcano. It’s actually the largest volcano by aerial extent in the solar system. So I think that would be a fun spot to land.

ANNIE MINOFF: I just type a vision of you Bob as like an intergalactic real estate agent.

ELAH FEDER: OK so Bob we got your tweet. This was inspired by the whales episode, correct?

ELAH FEDER: What happened when you listened to the whales episode that made you think about cats?

BOB COLLOM: Well I just haven't ever realized that we at one point hated whales.

ANNIE MINOFF: That’s a little bit strong. We were agnostic.

BOB COLLOM: And then reflecting on it like how the relationship with whales changed over time, I was reminded of a story I heard telling basically the same story about cats. It was totally acceptable to kill a cat. They were associated with witches and devil worship and dark arts. I don’t know what changed, but now, you know, you're a total monster if you hurt a cat.

ELAH FEDER: So what would you want to ask the cat historian?

BOB COLLOM: How did we go from hating cats to loving cats? And what was there a specific catalyst that changed that relationship?

ELAH FEDER: Was that deliberate?

BOB COLLOM: That was not. No. I’m going to roll with it like it was.

ELAH FEDER: So we have an answer to your question. We talked to the cat historian.

ELAD FEDER: I don’t think he would call himself a cat historian to be clear.

JOSHUA MARK: Well I was rather sucked into it actually because my wife was a huge cat fan and my daughter is a huge cat fan. They’re both cat maniacs.

ELAH FEDER: So first of all Josh confirmed that you were right that we used to really super hate cats

ELAH FEDER: and just to be clear, by we, I mean mostly Europeans because we didn't do a full sweep of the entire history of the world's relationship to cats, but Europeans definitely definitely hated cats and the low point was in the Middle Ages.

JOSHUA MARK: The 13th and the 14th centuries especially. We do know that there seems to have been this decimation of the cat population in Europe. We know that in the 13th century there were 79 cats that were rounded up and just killed in Cambridge England. And we know that in other places that same sort of thing happened.

ELAH FEDER: So the obvious question is why we hated cats so much and basically Josh says it had to do with the church.

JOSHUA MARK: When Christianity is trying to gain a foothold it has to demonize the previous belief system. So anything which was once held sacred by the pagans now becomes linked with the devil.

ELAH FEDER: So the thinking here was that the devil was actually a very big time cat lover. He'd do anything to protect them which led people to do some pretty twisted things to cats.

JOSHUA MARK: If you were angry with your neighbor let’s say you would grab a cat...

JOSHUA MARK: Wait how strong are you when it comes to horrific cat torture.

BOB COLLOM: I would read Wikipedia articles on serial killers.

ELAH FEDER: Okay, so this might be along those lines.

JOSHUA MARK: If you were angry with your neighbor, let’s say, you would grab a cat, and you would roasted over a spit. Now the cat had to be alive for this to work because the cat’s screams would summon the devil. And once the devil came because the devil was so fond of cats he would ask you to please put the cat out of its misery and he would give you whatever you wanted. So it's sort of like three wishes sort of deal and you would then say yeah I want you to take care of my neighbor who's encroaching on my land rights and Satan would say, great I'll take care of that, and then you would kill the cat and you would get your wish.

BOB COLLOM: What happened when the devil didn't show up you just kept killing cats?

ELAH FEDER: Could be counted on.

ELAH FEDER: Anyway, your actual actual question was about about the saving of the cat right? You wanted to know [trails off]

BOB COLLOM: Right. How did, where did we make that transition back?

ELAH FEDER: So according to Josh a few turning points. But the big one was the Protestant Reformation.

JOSHUA MARK: Once you have the Protestant Reformation of the 16th and 17th centuries the Church's power is broken. You no longer have this unified vision of what it means to be a Christian. Now, you know, you can believe pretty much anything within reasonable boundaries about your relationship with God through Jesus Christ and human beings can now rely on reason and during the Enlightenment people begin to see the cat as a kind of embodiment of cleanliness and self-sufficiency.

ANNIE MINOFF: Because of all the licking?

JOSHUA MARK: Cause of the licking. Absolutely right. Yes.

JOSHUA MARK: And with dogs and cats they both make out really well during the Enlightenment. We have cat and dog collars and jackets and little nameplates that they put on the collars from that time. Yea.

ANNIE MINOFF: By this point cats are not just these animals that we tolerate anymore. They've graduated to become full on pets. But then something happens that's actually even bigger and it happens in the 19th century with a discovery in Egypt.

JOSHUA MARK: She gets herself two Persian blues and these two cats become famous.

ANNIE MINOFF: A popular lifestyle magazine in the US starts touting cats as pets saying you know they’re not just for royalty anymore. Anybody can have a cat. And pretty soon everybody does. Like cats everywhere.

ELAH FEDER: That is everything. That is what we learned. So we’ve told you some very horrible things and wonderful things. Was this whirlwind tour of of cat abuse and glory pleasant for you?

BOB COLLOM: Yes. I don’t know if pleasant is the word I’d use. But yea it’s very interesting I never thought about the licking in particular. Is uh an interesting turning point.

ANNIE MINOFF: Wait so do you have cats Bob?

BOB COLLOM: I do. I have three cats.

ELAH FEDER: Do any of your cats practice the dark arts? Do they live up to their reputation?

BOB COLLOM: Umm they definitely still have that in their blood. They raid our cabinets for carbohydrates. Their favorite thing is to eat through the entire stack of tortillas. I wouldn't mind as much if they just pulled out one tortilla, but instead there's just a nibble through the entire every single tortilla in the stack. So they’re definitely still villains at heart.

ELAH FEDER: This episode was reported and produced by Kaitlyn Schwalje with help from me Elah Feder--

ANNIE MINOFF: --and me Annie Minoff. Our senior editor is Christopher Intagliata, our composer is Daniel Peterschmidt, I Am Robot And Proud wrote our theme. If you have a question you would like us to answer email us. We’re at undiscovered@sciencefriday.com. And if you want to learn more about the history of cats we have Joshua’s article from Ancient History Encyclopedia on our website. That’s at undiscoveredpodcast.org.

ELAH FEDER: And we’re going to try to come back as soon as we can with Season 3 so sit tight. We’ll see you soon.

JOSHUA MARK: Cats were highly revered in Egypt, and when a cat died in the house the people would save their eyebrows as a sign of mourning. And you only came out of that state of mourning when your eyebrows grew back.

BOB COLLOM: Goodness. Or if you didn't like it much do you just do one eyebrow?

KAITLYN: Half an eyebrow?

Copyright © 2018 Science Friday Initiative. All rights reserved. Science Friday transcripts are produced on a tight deadline by 3Play Media. Fidelity to the original aired/published audio or video file might vary, and text might be updated or amended in the future. For the authoritative record of Science Friday’s programming, please visit the original aired/published recording. For terms of use and more information, visit our policies pages at http://www.sciencefriday.com/about/policies/