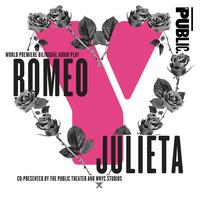 Saheem Ali: For this production, I really resisted the urge to set it in a particular time and place because I wanted to embrace different kinds of Spanish depending on who the person was, who was speaking their language. The listener, I hope, will be conjuring their own imaginative space using snatches of audio design that we've created without necessarily saying that this is set in this particular place.

Saheem: Romeo and Juliet is probably the play that I know best out of the cannon, my desire then to do this not only on the radio but bilingual is because I grew up bilingual myself talking English and Swahili. Crafting a world where people bring whatever version of Spanish is true to their personal identity, to their history, the sense of family I wanted to embrace that and allow that complexity of Spanish to exist. Even though I wouldn't call myself a fluent Spanish speaker, cuando hablo español me siento como un niño. Pienso que no puedo dirigir muchas obras en español pero yo sé el texto de Romeo y Julieta y puedo dirigirlo.

Ricardo: Join us as we retell this tale as old as time en una nueva mezcla de lenguajes. Curl up with your favorite pillow or person, tu perro o gatito y sueña con nosotros. You can follow along with the script or translation, both of which you can download on the Public Theater's website. Before the curtain goes up sonically speaking, of course, the cast and creative team wanted to share some of their thoughts about the production, the whys and porqués, the journey, the love, the amor. Ayanna Thompson, Public Theater's Shakespeare scholar in Residence shares her thoughts sobre la importancia de esta producción.

Ayanna Thompson: I think it's incredibly important in this moment. Romeo y Julieta is acknowledging the fact that the United States is not all English-speaking all the time, acknowledging the fact that our Latin X brothers and sisters are bringing rich cultural traditions that we will benefit from. I think it's incredible to have a black Julieta. [ríe] It's so beautiful and to hear her speaking in Spanish it's so mazing. [ríe] I think this is exactly the production we need right now when our world is so angry and fraught and sick.

Lupita Nyong’o: For me it became this cautionary tale about the dangers of tribalism.

Lupita: I think that stories like this that stand the test of time have a renewable energy. There's something innately applicable to different generations that experience it and that they hold certain inalienable truths that make them relevant for all time. The fact that the story about tribalism is packaged in this love story makes it very intriguing, it's inviting you to its fire and I think that's the best way to create empathy when you invite people to that passionate fire like Romeo and Juliet does.

Oskar Eustis: By doing in a bilingual version you are casting a reference, casting an eye on the fact that we are still a divided country and that we somehow have to figure out how to get past that if we're going to be the country we should be, the country we dream of being.

Oskar: What is it, I think was Octavio Paz that said, "Mexico and the United States are two countries divided by a common border." [ríe] Exactly the dialectic contained in that is what I think Romeo y Julieta is about. How can we not be divided by our common border? How can we actually take the ways that we speak differently, that we communicate differently, that we envision ourselves differently and leap over that wall and find ourselves connected despite our differences. That's really America's project right now is as it is Romeo y Julieta's.

Ricardo: Translator Alfredo Michel Modenessi sees a special import to this production for those of us, como yo, like myself, caught in between la cultura de nuestros padres y la cultura estadounidense.

Alfredo Michel Modenessi: It's something that's reminding you the in-betweeners there where the other part of you comes from because it's been there, it's been through your parents or your mother, but maybe it's your grandmother. It's two generations back and it's like, "Oh, wait a second, wait a second. Oh, wait a second. It's here. It's still here, it still speaks to me. I connect and there is a reason why I should continue to connect to it."

Ricardo: At the suggestion of Alfredo, Saheem eliminated the role of Julieta's father and made her mother the head of the household, la que manda, played by Florencia Lozano.

Florencia Lozano: It was incredible. I think she really has internalized the patriarchy and that is in some ways the tragedy of the play for her, is that she couldn't bear her daughter to live the life that she lived and suffer the things she suffered so she ended up in directly killing her.

Modesto Lacen: It has been a journey to feel that most of the time I was being judged as an actor because of my accent. I look African-American, but I am Latino. I'm first of all grateful that we're having this conversation, that there's more opening now for Afro-Latinos in our business because we exist. There's no contradiction in being black and Latino. Shakespeare, of course, was written in English but Shakespeare is for everybody. I think the public has done that since the beginning, thinking about Raúl Juliá that he played Shakespeare were his accent was thicker than mine. You don't need to be British or have the American standard English to perform or to feel or connect to Shakespeare.

Ricardo: Dear listeners, es hora de comenzar. Antes de empezar, I want you to think of someone. Someone you love, alguien que amas. Piensa en su cara, sus ojos, su nombre and as we begin this tale of love and loss, dí su nombre, speak their name into the world.

Hiram Delgado: My name is Hiram Delgado, I play Tybalt. I want to send a big shout out of love to my family in Puerto Rico. Miss you, I think about you every day.

Alfredo: Hello, Jennifer Modenessi and her brother Maurice as well. Hello, and so on to everyone who's a Modenessi there.

Oskar Eustis: I want to say I love you to Jack Eustis and Lori Eustis and Kyle Brown.

Modesto Lacen: Sí, Julio Monge which is part of our cast. Mr. Graves, Douglas Graves, he was my theater teacher in seventh grade and he cast me in my first role ever. It is because of that production that I went on to become an actor.

John J. Concado: Hello, and hola, mi gente. What's going on? This is John J. Concado and I play Peter. I just want to send a lot of love to mi mamá in Queens and to mi papá and all my family in Buenos Aires, Argentina. Lot's of love to everybody and please stay safe.

Copyright © 2021 New York Public Radio. All rights reserved. Visit our website terms of use at www.wnyc.org for further information.

Produced by The Public and WNYC Studios