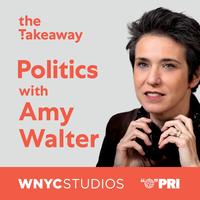 Amy Walter: Welcome back to politics with Amy Walter, from The Takeaway. Right after the election, I try to talk to as many of the incoming freshmen members as I can before they're sworn in. Next up is my conversation with Congresswoman-elect Ashley Hinson from Iowa's 1st district. She's a former TV anchor from Cedar Rapids and a state representative.

She's part of a record-breaking number of Republican women who've been elected to Congress this year. She represents a purple district where she flipped a seat from blue to red. We caught up on Monday while she was participating in virtual freshmen orientation and isolating after receiving a positive coronavirus diagnosis. She ran on a message of bipartisanship and I asked her if there were a few issues she could imagine working with Democrats on.

Ashley Hinson: I think there's a lot of common ground on what I call the kitchen table issues. We've all been talking about childcare, the cliff effect, some of the challenges surrounding taking leave as a family. I've talked about options for that on the campaign trail. I'm willing to come to the table on that too because I realized that's something that our families need. I think there's a middle ground to be heard, so if the bill is reasonable, I'm absolutely willing to support the right piece of legislation.

That's what I said by running as a common-sense conservative here. I'm going to vet every bill absolutely, but if it makes sense for the people of the first district, all support it. Immigration is another that I think we absolutely need to move forward on. I don't support blanket amnesty, but many Democrats don't either so I think there are many places in the middle that we can come together and actually move the ball forward, which is what I want to do.

Amy: You've worked in now on both sides of this thing, behind the mic and now somebody else asking you questions. Can you appreciate now that you've been in politics, the pressure on someone in elected office to stick with party first?

Ashley: Yes. I've always told people where I stand and there have been people who've supported me with a check who have called me afterward and said I don't really like the way you voted on this and I'll say, I'm sorry. I voted for my district. A lot of times they still support me once I explained the why. Context for me is what really matters in all of this. Being able to explain why I did something, what my perspective on it was and all the listening that I did beforehand when I am able to talk about that, I think that does make a difference to people even when they disagree with you.

As far as the partisan aspect it is tough. I think that, unfortunately, what we've seen is with some of the people who've been in Washington, they've been there a very long time. Those relationships are pre-established and sometimes the personal feelings get in the way I think of getting some things done. I think, unfortunately, we need a new crop of leaders and that's why I stepped up to run for this seat in general because I want to build that consensus and get things done.

I've already told our leadership; I told them when I met with leader McCarthy last year, I said, "There are going to be times when I'm probably going to not vote with the caucus. I'll tell you when I'm not going to, but I'll let you know." He said, "That's okay, I expect you to have to do that. Just be honest."

Amy: What do you to folks who look at the fact the president has not conceded is continuing to push theories that have been already denied by even Republican leaders in these states as false about vote counts and fraud. Do you believe that Joe Biden is the president-elect?

Ashley: I believe that there are some very close elections. We have one of those here in Iowa that was within 30 votes. I want to make sure every legal vote is counted, all fraud is investigated, but I do believe also that Joe Biden should be getting security briefings because it is looking like he has a majority of the electoral votes at this point. I am confident that he should be getting those briefings because I think that's what I would have expected with Obama and Trump four years ago as well.

Amy: Do you worry that we're actually undermining integrity when questioning fraud that is not there? Are there specific examples of places where there is enough "fraud" to overturn any one of these states' final margin?

Ashley: I'm not in the weeds on all of the lawsuits that have been filed. I want all the lawsuits to play out. That's what I want.

Amy: I'm talking to you as you are actually quarantining. You recently got a positive coronavirus diagnosis, is that right?

Ashley: Yes. I am isolating at home and we pulled our kids out of school until after Thanksgiving. I've worn a mask everywhere I've gone publicly with the exception of eating, drinking, or publicly speaking. I've been in isolation and I'm hoping to rejoin my colleagues soon.

Amy: Talk about the issue of the pandemic writ large. First of all, I'm glad that you're feeling better. It sounds like it. Talk about how the pandemic do you think has been handled at the state and at the federal level and now you are going to be somebody-- obviously, you're going to be in the front row here and be making significant decisions about where we go from here.

Ashley: Obviously I hope we get the vaccine out as soon as possible. I think that's really going to be for lack of better way of saying it, the shot in the arm, our country needs to be able to move forward. Number two, we need to also make sure we're getting people the relief they need. Unfortunately, as we've seen in traditional DC fashion, they've failed at passing a meaningful second relief package here.

When I'm out talking with businesses who are about ready to deal with the second wave here in Iowa, our numbers are very high in terms of the number of coronavirus cases. I'm hearing from them they don't want to shut down, but they do want to make sure that we are doing what we can to reduce the numbers. Making sure we have adequate money coming in for testing so that everybody who needs a test can get one. Small business relief is another one where I think we absolutely need to make sure because the economy has been hurt by this pandemic and they had a number of shutdowns and that is very, very challenging.

We've seen local restaurants that are already announcing they're not going to stay in business past mid-December, that breaks my heart because I think some of these places were doing just fine until this pandemic hit. It's not lost on me how important these decisions are. I think I'm against mass mandates, but I also believe people should be wearing masks in public when they can't socially distance.

Amy: Can it work if there is no mandate, because as you pointed out, even though you have been really vigilant and wearing a mask, you still got sick, which suggests that having everyone where one might be the answer?

Ashley: My son was sent home from school. They require masks at school except for the occasion when they're eating in the lunchroom. He was directly exposed to someone in the lunchroom during that short amount of time they had their mask off. I got asked where I got coronavirus last week. I have no idea because it is spreading so rampantly regardless of people wearing masks. Everyone I was around was wearing a mask too.

Businesses are requiring them to come in while many of our local communities have issued mask mandates, they're not technically enforceable according to our Iowa code but I look at the number of businesses that have the sign on their door mask required for entry and people are doing that in order to go into those businesses. I think it's happened organically.

Amy: I want to ask you about one more thing, which is the fact that you are part of a record number of Republican women elected this year and we haven't gotten the final results yet for the House, but almost every one of the challenger races that have been won were a Republican flipped a Democratic seat was done so by a female candidate. Why do you think that is? Do you think that this is a sign for the Republican Party leadership to recruit even more Republican women going forward and put them in more positions of leadership?

Ashley: I think it speaks to a couple of things. I think the number of women who ran this cycle, it was a record-breaking number of Republican women who filed to run but also when you look at the ones who were able to be successful, they were not only just women but business leaders, leaders in their communities, veterans, minorities. We had a very diverse class of candidates this cycle that I think spoke to not only recruitment but support from leadership.

I had meetings very early on and made clear to them why I believed I was the right candidate and they got behind me. I think that's important in being successful and we had a number of groups, for example, that got behind strong Republican women candidates. They didn't get behind every woman, but they got behind candidates they knew were good candidates and could be successful.

VIEW PAC, for example, and Winning for Women, E-PAC Elise Stefanik, Congresswoman Stefanik's group, those not only provided resources but also connections across the country. I was already having conversations with other women who were running campaigns and saying, "Well, what are you doing, and how's that working?" We were able to talk about that, develop relationships, and now I'm going in with a class of women who I respect and admire and I'm just excited to work with.

Amy: You did, you had an informal networking with many of these women candidates where you were sharing like, okay, what did you guys do about this or what happened when you had to deal with X, Y, and Z issue?

Ashley: Sometimes you just have a bad day and you just need someone to talk to who is going through the same thing you are and so many of these women ended up being friends to me on the campaign trail. I'll be at virtually in many cases, many of our events were on Zoom, but no, I think it's been a very unique year to have to run a campaign in general for anyone on the ballot this year, but I think unique in the sense that we did have an incredible class of candidates come in and be successful this year.

Amy: Congresswoman-elect, congratulations. I hope that everything continues to go well with your recovery and we'll see you in Washington soon.

Ashley: Thank you. I'm looking forward to getting to work.

Produced by PRI and WNYC