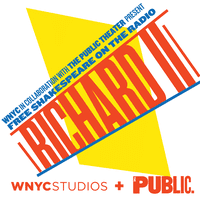 VINSON CUNNINGHAM: On June 3rd, as streets filled up with protesters from Brooklyn to the Bronx, a beloved New York City tradition was taking place. But this time at home. Over two dozen people turned on their computers and sat down to read Shakespeare.

SANJIT DE SILVA: It was a mix of incredible excitement and also

SAHEEM ALI: Should we be engaging in something that some dead old white guy wrote 400 years ago?

KAREN ANN DANIELS: It's true, it's a choice. Shakespeare is always a choice. But I still love him.

ANDRE HOLLAND: For me it’s Shakespeare at its best.

MICHAEL COHEN: It's complex, it's messy.

VINSON: The play begins in the wake of a murder

AYANNA THOMPSON: A deep crime has been committed.

VINSON: It’s a battle for control and power, and who gets to wear the crown.

MICHAEL COHEN: How is this play relevant to today?

SAHEEM ALI: There is a man who is killed in the play, and it sets off a chain of events. Like, people are angry because of the death. People want action. We're in a moment that is very similar.

AYANNA THOMPSON: What does it mean to shuffle off an old system.

SANJIT DE SILVA: The play in one word is about revolution.

VINSON: I'm Vinson Cunningham, staff writer at the New Yorker.
Over four episodes we'll listen together to Richard II, directed by Saheem Ali and performed by some of the best Shakespearean actors in the country. We'll hear about why it's such an important play to be listening to and talking about right now.

KING RICHARD:
Not all the water in the rough rude sea
Can wash the balm off from an anointed king;
The breath of worldly men cannot depose
The deputy elected by the Lord.
For every man that Bolingbroke hath pressed
To lift shrewd steel against our golden crown,
God for His Richard hath in heavenly pay
A glorious angel.

VINSON: This is Free Shakespeare on the Radio. Presented by WNYC in collaboration with the Public Theater. Coming July 13th.

Produced by The Public and WNYC Studios